First of all, I temporarily have a new blog design up.  Tell me in COMMENTS what you think of it vs. the prior design.  Thumbs up or down?

So today I give you that ONE TWIST that turns social media from STILL getting WHOOPED up on by email marketing TO a super power producer of sales and leads.

Ryan Delk from Gumroad, based on the vast amount of data in their system, they have found the following conversions rates for traffic from Youtube, Twitter and Facebook. 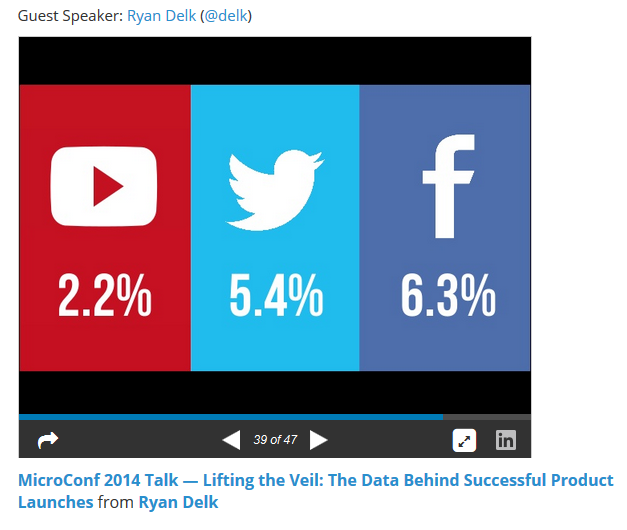 Clicks from email that go to Gumroad convert into buyers at 9.4%.

In other words, email marketing is STILL the King of the Road in terms of conversions.  Of course, you DO have Periscope, Meerkat, Facebook live stream and other live video services in the mix now.

Ryan didn't give any numbers on those.  I have no doubt that Grant Cardone crushes his conversions from his live streams.  But he's also a world class sales person.  One of the best I've heard.

With that in mind, let's just say that email marketing still rocks it out in a major way when it comes to conversions.  Not only that, in terms of CLICKS it wins also.

When I make a post to my Facebook page, the REACH of my status updates is really bad.  Sometimes only a few people even SEE a post.  I'm getting 1/2% reach or so.   And yes, I do everything I can to engage people. 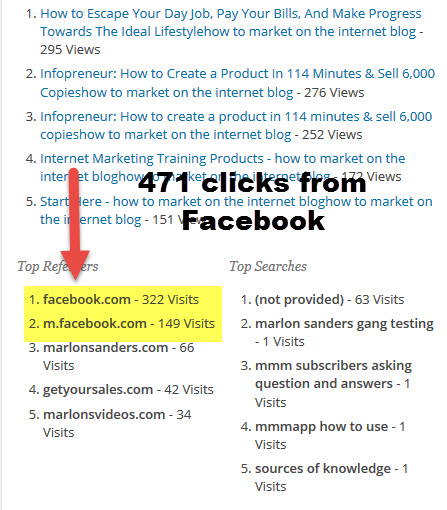 Don't get me wrong.  In the past 30 days, my blog has 471 clicks from Facebook.  However, with just ONE email, I can send more clicks than that.

To get those Facebook clicks, I interacted, scheduled a bunch of content posts to my Facebook page and, in short, invested a TON more time and energy than I do sending an email.

Of course, when I run Facebook ads, those clicks are hands off. But you pay for every click.  Email isn't free but it's a LOT cheaper per click than ANYTHING else.

The ONE TWIST That Turns Social Media Into a BEAST!

If you have tracked with me so far, then you should be totally crystal clear that your click through rates and conversions from social media suck in comparison to email.

But what if you could turn the tables?

Once you get those social media people ONTO your email list, then life is good again!

That seems like an obvious solution at first. And that's why the story about “Obvious Adams” rings true for so many.

[Tweet “Everyone THINKS email marketing is dead. Surprise! It's alive and kicking the crap out of social”]

Once you include a URL on a Facebook status update, you pretty much ensured it’ll get very little reach.

Because they want you to have to pay to reach their audience, even if you already paid to get them to like the page to begin with.   Or the people who liked your page at the outset were your OWN customers!

Now, if you bought the Ron Douglas training I promoted a few weeks ago, you know how to play that game and win.

But still, I LOVE that on Twitter, you just don’t have to worry about it. 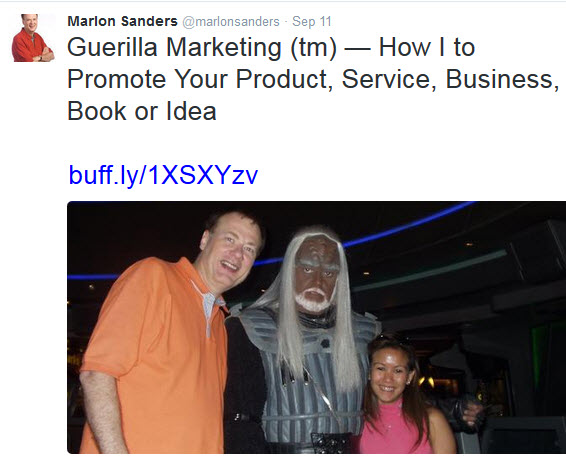 Here’s one where I send people to Instagram. It had 0 clicks.

That one had 2 link clicks.

The results are SMALL but I’m not that active on Twitter. I don’t engage a lot. And tweets can be automated via Hootsuite, although it’s better if you just send ‘em when you have a spare second. You’ll get more interaction.

Then you can work FACEBOOK.  I already showed you the 471 clicks earlier.

Those are clicks to my BLOG. At a 10% conversion rate, I would have captured 47 email addresses. I found a new type of page from BACKLINKO that will allow me to double that.

This one shows how to create a httpsqueeze page with high conversions on a blog. 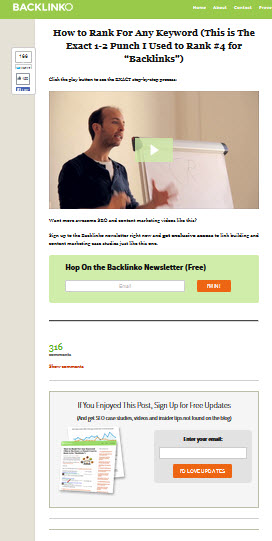 If you bought WP Leads and Sales Dashboard before, I recommend you take what you learned from it and then combine it with all the latest, greatest stuff from Backlinko. He has THE BEST white hat linking stuff. Bryan at Videofruit.com has also taken a few of those ideas and created a system to outsource them.

Anyway, the POINT is you CAN drive your Facebook traffic to a page like the above. You can also take them to a pure squeeze.

It takes an hour to publish them. And I slacked off this past week. The payoff for doing it isn’t huge. But you do get subscribers from it.

The BETTER approach is to create a funnel so you afford to do what Facebook wants you to do which is to buy clicks. If you can get opt ins for $1 to $3 on Facebook, that’s great.   My friend Peter Visser gets them for as low as .59, which amazes me.

Will Irish over at 22social.com is able to do the same thing. I subscribe to Will’s Facebook newsletter which is inexpensive and always has good updates in it.

Step Three:  Use content upgrades on your blog to get as high as 50% opt ins

By using content upgrades on your blog posts, you can get 30% to 50% opt ins.

Kim Roach?  Someone else?

I found out about them from Bryan Harris at VideoFruit.com because he has a BRILLIANT article on how to do them.

He has a genius blog post called Lead Magnet:  11 ways to turn readers into email subscribers. 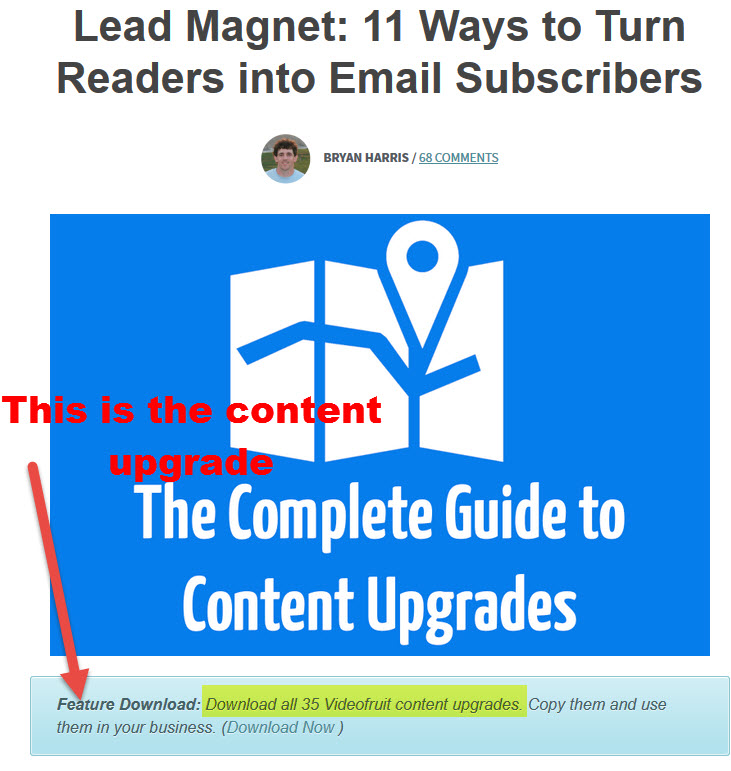 I'm doing this on my blog here at Marlonsnews.com also.

If you’re on Periscope or Meerkat, all you need to do is offer a juicy incentive and give your url.   THAT could be a real game changer in terms of percentages.

Still, the REASON email beats them out is because there's a lot  of resistance to people getting onto your live stream.  It takes more effort than subscribing to an email list.

Did you know when you launch a product, you get MORE than just your buyers?

When you launch a product, it creates a lot of buzz that ALWAYS brings in an abundance of subscribers. Product launches are the #1 way I’ve built my own list hands down.

The FUNNY thing about Internet marketing is everyone is hyper sensitive to the latest, greatest thing.

Some people won't buy one of my products with a 2013 copyright date, EVEN IF it's all evergreen content!  That's a head scratcher for sure!

You're twistin' my melon, man!

NOTHING beats it yet.

None of the buzz words do.

Step Six:  Remember it's not either or. It's both and.

As much as time and energy allows, use them ALL.  But make SURE you're funneling EVERYONE onto your email list.

In the Rising Tide Workshop I explained how to get more conversions.

The PROBLEM is that while email is still king, open rates have gone down as have clicks.   You have to work at solving these issues and getting conversions.

Let me hear your thoughts in comments. 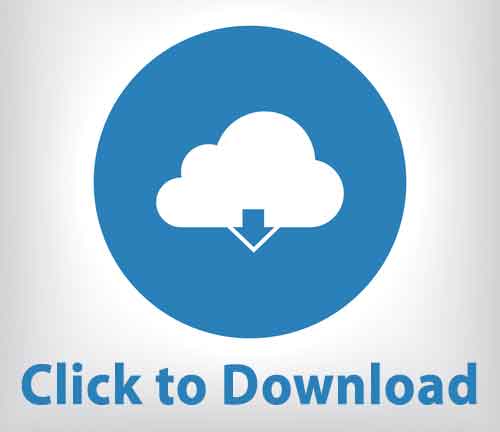 In 1978 this ad changed my life. But what is “the thing”
that caused me to buy it? What about the other ads I show?
What secret allowed me to get paid 70,000+ times for info products?
Click here to see it.

Author of "The Amazing Formula That Sells Like Crazy", creator of the original Push Button Letters software, creator of the genre of "Dashboard" info products. Speaker in 120 seminars around the wordl.

Republishing Content: From 0 to 255,262 article views in 1 month using republishing (and much more)

Content republishing -- It's how bloggers get started and score big results!  Today we take a SUPER DEEP dive into content marketing.  "Marlon, how can I find my audience, get my word out bigtime AND build my list?  Via my deep dive research, I uncovered businesses and individuals starting from scratch and building big audiences, lists and readers ...